For Turkey’s Kurds, Erdogan Now ‘Paying for His Laughter’

Ed. Note: What began as a demonstration against the planned demolition of Gezi Park in Istanbul’s Taksim Square has now evolved into a wider denouncement of Turkish Prime Minister Recep Tayyip Erdogan. Resentment against what many see as a tilt away from the country’s secularist past and rising authoritarianism has brought together segments of the population traditionally bisected along regional, religious and political lines. One group in particular, the minority Kurds, say that state-led persecution under Erdogan has increased, pointing to a 2011 massacre of 34 villagers and the cover up that followed. Mürsel Berat Saymadı has been in Gezi Park since the start of protests last Friday. An ethnic Kurd from the city of Diyarbakir, he works as a radio announcer with the independent station Free Radio in Istanbul. He spoke with NAM contributor Sean David Hobbs about how the state’s conflict with the Kurds has helped fuel the ongoing protests.

New America Media: When did problems between the Kurds of Turkey and the Turkish state begin?

Mürsel Berat Saymadi: The Kurdish Question has been an unsolved problem in Turkey since the founding of the Republic of Turkey (in 1923). This problem began during the Presidency of (state founder) Kamal Atatürk, and the Turkish state has employed a great amount of brutal violence to crush the Kurdish rights movement ever since.

Now we have a situation where this conflict has gone on for 90 years. Neither the Turkish state nor the Kurds have won. 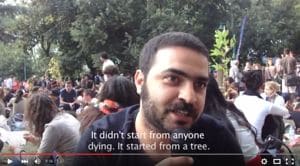 NAM: How have things changed under Erdogan?

Saymadi: When Prime Minister Erdogan’s AK Party came to power in 2002, new tactics were employed in Kurdistan by the Turkish government. Erdogan said out of one corner of his mouth, “Kurds! We are your brothers! I understand you and your problems. You can open Kurdish schools and TV stations! I will solve this Kurdish Question!” But then out of the other side of his mouth Erdogan said, “We are one state, one flag, one union!” and so won the vote of Turkish nationalists.

Soon after coming to power, Erdogan went to Diyarbakir (a key Kurdish city in eastern Turkey) and said he would build a new prison there. The old Diyarbakir city prison was the worst prison in Turkey, notorious as a place of torture and death for the Kurdish people. For Erdogan to say he wanted to build a newer prison in Diyarbakir was deeply offensive to Kurds. Many Kurds have relatives who were killed or maimed in the Diyarbakir prison.

Really, in fact, it is very easy to run Turkey. You just have to talk about how you are fighting against “the [Kurdish] terrorists in the mountains of southeast Turkey.” If you say that enough then the TV stations and the business community are all behind you. Erdogan and other politicians don’t really want a solution to the Kurdish Question. Right now there is a huge arms industry in Turkey. Everything is connected with this industry. No one wants to harm this system.

NAM: But Erdogan has allowed the opening of Kurdish channels and schools.

Saymadi: Sure he did. But while the TV channels that he allowed to open are broadcast in Kurdish, they speak with the mentality of the Turkish State. The only difference is that now on TV and radio you hear the state propaganda in Kurdish and Turkish, instead of just in Turkish.

Saymadı: It is one of the reasons. Another is the fact that no government action has been taken against the Turkish military for the killing of 34 innocent Kurdish villagers near the village of Uludere along the Iraqi border. These villagers were smuggling food and fuel across the border in December 2011. To date the Turkish government has claimed that they thought the villagers were [members of the Kurdish separatist group] P.K.K.

NAM: Yes. That was what Erdogan said. He said it was a mistake.

Saymadı: It wasn’t a “mistake.” We all know this is a lie. The government and the military knew that it was villagers crossing the border because the same villagers have done this crossing for many years. Later, when one of the smugglers’ relatives, Fırat Encü, went looking for justice from the AK Party government in Ankara, he was imprisoned and has been thrown behind bars four separate times. Encü’s family lost 28 people in the Uludere massacre. Even with that many dead, the Erdogan government still refuses to acknowledge it!

NAM: What were the reasons for Encü’s arrest?

Saymadı: The government prosecutors found whatever they could to arrest Encü. But they had to let him go everytime. There was no crime that he committed besides being a scarred human living with the pain of 28 lost loved ones. His own brother was killed! Encü had every right to go to the police station, to go to the Turkish Air Force’s headquarters, to go to the Grand National Assembly in Ankara, wherever he wanted to find justice. And Encü got no justice. None.

And the saddest thing about this whole affair is that the Kurds who live on the border don’t smuggle to get rich. Most go for a little bit of extra money, like twenty dollars to buy telephone credits to speak with their girlfriends. Tiny little things like this to make their lives better. Smuggling (in eastern Anatolia) isn’t new. It has been happening for hundreds of years. Really there is a five hundred year history of smuggling along the borders of the Ottoman Empire, Kurdistan and Iran.

NAM: How does Erdogan’s handling of the Kurdish Question tie into the Gezi Park protests?

Saymadı: If you ask me the Uludere Massacre and Erdogan’s two-faced behavior is ultimately about one thing and one thing only … The government and especially Prime Minister Erdogan … are telling us that if they want they will “cut and hang us.” They’ll use planes and secrete cameras and they’ll bomb us.

Here’s another example of Erdogan’s arrogance and hubris. In Turkey we have the holiday, Children’s Day, which we celebrate on the 23rd of April. Traditionally the Turkish Prime Minister brings a child into his office on that day and seats the child at his chair. Then that child becomes the ceremonial Prime Minister for a day. This year, in 2013, do you know what Erdogan said to the boy who took his place as Prime Minister? “There now, you can cut and hang people.” It was a big joke! The Prime Minister laughed. The media laughed. But the people of Turkey, especially we Kurds, didn’t laugh.

Now the resistance in Gezi Park is about the government and Erdogan paying for their laughter.

Sean David Hobbs is a writer, multimedia journalist and academic living in Istanbul and Cairo.