(Istanbul) The legendary music clubs and belly dancers were the first to go. There’s no longer a trace of the lively coffeeshops or balcony restaurants. And now, the once-narrow alleyways are strangely opened wide: because of the bulldozers, Sulukule, a gypsy settlement within Istanbul that dated back to before the 15th century, has become nothing more than a memory.

Nearly 1,000 years of history have been unceremoniously demolished over the past six months as the last buildings of this relic of the Ottoman empire have been razed. The roar of bulldozers was unbearable for those within earshot, but barely a sound has reverberated throughout the rest of Istanbul, Turkey and the world, as Europe’s oldest permanent gypsy settlement was torn down.

“Now it is gone,” laments Sukru Punduk, close to tears. Punduk, 41, is a Roma musician and native of the district, which traces its history back to Byzantine times. He sits with a few other Roma men in an Istanbul café, angered by the destruction of their homes, businesses and way of life. The demolition—or redevelopment, in the words of the governing authorities—began in 2006. The few remaining buildings next to Istanbul’s centuries-old stone walls were crushed during the past year.

The Roma families who were from this historic neighborhood feel the destruction is also an attack upon their heritage and culture. Once the proud home of nearly 5,000 Roma people, only about five percent are left in the district as bulldozers flatten the mounds of debris. 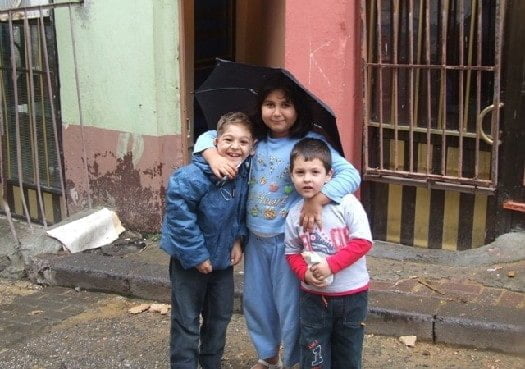 Despite the chaos in their lives, the children still play in Sulukule.

“Will we continue to exist or will our culture disappear?” Punduk asks. 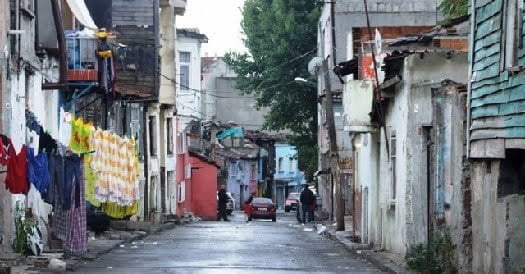 In 2007, when this shot was taken, the area was still inhabited.

Demolitions began in Sulukule in 2006 as the municipal government started a process billed as urban renewal. However, the national Turkish newspaper Hurriyet reported that the municipal government’s Justice and Development Party (known as the AK Party) sold some of the newly-emptied land to family members and friends of AK Party leaders.

Hacer Foggo, whose glasses give her the air of a scholar, is one of the founders of the activist group Sulukule Platform. She called the renewal plan “corrupt gentrification,” and strongly suspects an economic motivation. “The plan is to remove the poor from the city center and build expensive homes in Sulukule,” she said.

**But residents were already being moved out in 2007.

The Romani have been present in Istanbul since the middle of the 11th century, when the city was known as Constantinople. Built along the city’s ancient protective walls, Sulukule was Istanbul’s first entertainment district, which included a thriving red light sector. Generations of people from all over Turkey came to Sulukule’s famed music halls.

Punduk explains, “Ours was the culture of music and dance in Istanbul. People came to Sulukule for the music and the beautiful Romani belly dancers. We had fortune tellers and dancing bears.” 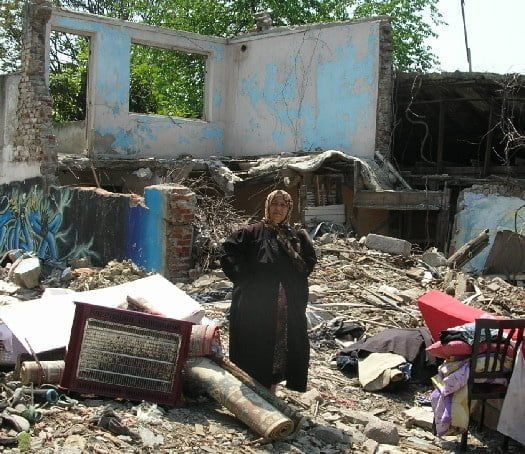 The exotic strain of Rom music that grew within Sulukule was a mix of traditional Balkan and Middle Eastern music intermingled over generations with the court music of the Byzantines and Ottomans. The result was a unique Istanbul sound.

The beginning of the end came in 1992, when conservative government leaders shut down Sulukule’s music and dance halls. Poverty and poor education—already chronic problems there—became even worse with the loss of the entertainment venues.

“Even after 1992, we could all live together at least. We were poor, but rent was cheap,” Punduk says. “We got by economically and preserved our culture.”

Then came the urban renewal plan of 2006, which resettled Roma in the Tasoluk public housing development 40 kilometers outside of central Istanbul. Over the past three years, nearly 700 families from Sulukule took up residence there—but only 20 families remain in the new neighborhood.

High rent in the new development has forced some Roma onto the streets, and many more into cheap apartments throughout Istanbul where, stripped of their community and culture, many say they have suffered alienation and depression. 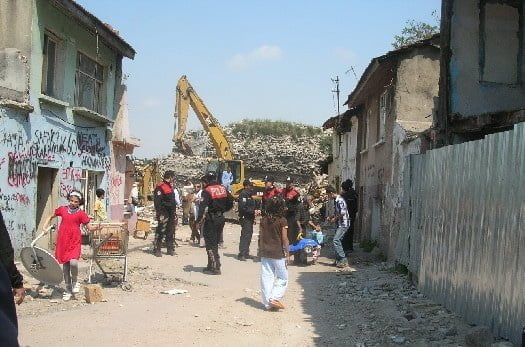 Watching the demolition of a thousand years of culture. (Photo: Hacer Foggo)

All of this has unfolded even though UNESCO listed Sulukule as an endangered World Heritage site. More recently, the U.S. Congress’ Joint Helsinki Commission urged the Turkish government to protect the Sulukule Roma.

**The spot to wash your feet before prayers is gone. So is the rickety wooden house in the background.

In April, the commission sent a letter to Turkish Prime Minister and AK Party leader Recep Tayip Erdogan, which noted that the “Roma community in Sulukule is living on the fringes of society and continues to be treated unfairly.” The letter urged Erdogan to implement a program to “preserve this centuries-old neighborhood and allow the Roma there to remain together as a community.”

Punduk said he and other Romani leaders support music groups that reach out to Roma children, and thus keep the spirit, culture and artistry of Sulukule alive. Still, he is despondent when he considers all that has been lost. Sitting in the café and gazing at his Islamic prayer beads, Punduk has no answers. 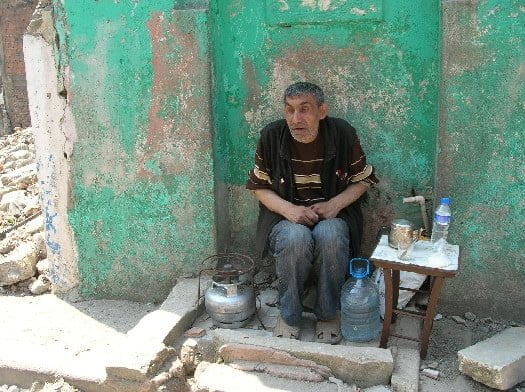 This man has a portable stove, drinking water, and a coffee pot. But he needs more than a wall to maintain his community. (Photo: Hacer Foggo)

“Ours is a very old culture,” he says, “It isn’t just Istanbul or Turkey which lost this special place. The world has lost a piece of its culture.”