HOT TAMALES: MY QUEST THROUGH THE AMERICAN SOUTH 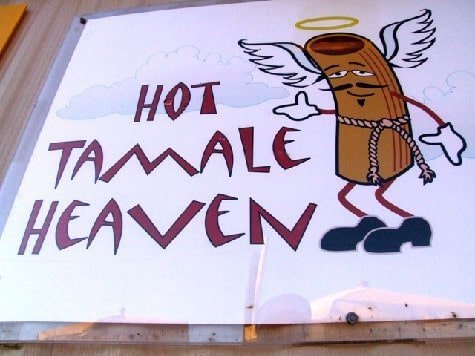 Eugene Hicks, 65, leans on the front counter of his Clarksdale, Miss. restaurant, and his elbows thud on the wooden countertop. Hicks is a large man, and his establishment, Hicks’ Hot Tamales and Barbeque Banquet Hall, is a local institution. With one meaty finger he scratches his chin and moustache, thinking. The scratching sounds like sandpaper on wood.

“I don’t rightly know, but I suppose the hot tamale came up to us in the Mississippi Delta from Mexico. At least that is how I heard it.”

When? During the Mexican-American War? Brought by returning soldiers or captured Mexicans? Migrant laborers?

Hicks raises his eyebrows. He doesn’t know. Like everyone I talked to in the area, he is not certain how the hot tamale—traditionally a south of the border food staple—traveled to the Mississippi Delta. Neither guidebooks nor history books have an answer. Not even an Internet search was able to crack this enduring mystery. 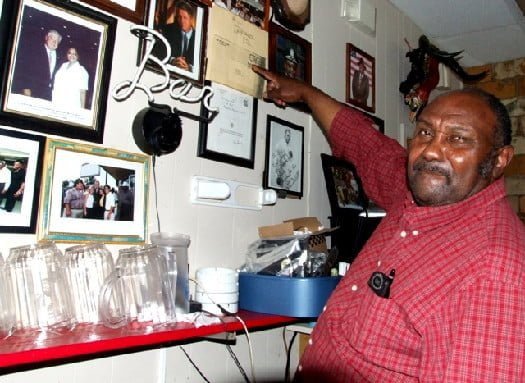 Eugene Hicks talks about his Delta tamales with great pride, but like everybody else, he can only speculate about its origins.

Whatever its origins, Delta hot tamales are now a ubiquitous presence in this land of the blues, cotton mills and southern fried everything. No matter how small or remote the town, there is guaranteed to be at least one place that serves this spicy treat.

I decided to seek out the hot tamales establishments and find out for myself, and score some samples for myself in the discovery process. Hicks’ place is my first stop in my search for the ideal Delta tamale and the roots of how the heck they got here.

Steamed chili and corn meal fill the air in Hicks’ restaurant. I order a half dozen. Traditionally wrapped in a corn husk, a hot tamale is corn meal surrounding chili sauce and meat boiled to greasy perfection. Hicks explains that while the hot tamale has only a few basic ingredients, there has to be the right mix of meat and spices.

“No one has ever told me that they didn’t like one of my hot tamales,” Hicks says. “That is, to my face.” I don’t doubt this. Hicks’ hands are the size of compact cars.

When I’m done, I walk outside, my stomach filled and my mind sleepy. Running alongside the restaurant is the Sunflower River. The water is so still, though, that “run” is just a traditional term.

Known worldwide as simply “the Delta,” this northwest quadrant of Mississippi was an uninhabited wilderness before the Civil War. Yearly floods from the Mississippi River kept away would-be pioneers. With modern levees and dams, early settlers transformed the rich land into an agricultural bonanza. Swamps were drained and trees removed, revealing farm-friendly alluvial soil created by centuries of river flooding.

When the Delta opened up, African-Americans, Italians, Germans, French, Chinese, Lebanese, and Russian Jews flooded the land as the river had before them. The economy boomed. Huge cotton farms were built between the years 1865 and 1930. The owners became rich. The share-croppers merely eked out a living. 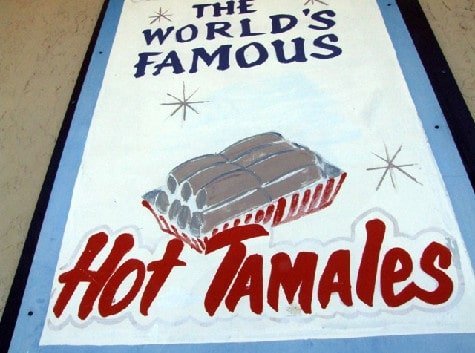 Hot tamale fame is everywhere in the Delta, including Vicksburg, Mississippi.

John T. Edge, director of the Southern Foodways Alliance, has researched the topic and collected oral histories on the subject. He theorizes that African-American share-croppers most likely picked up the recipe from migrant workers from Mexico some time after 1920.

Yet the Mexican tamale is a different than the Mississippi Delta tamale. Wrapping corn meal in a corn husk or corn “shuck” is standard for both, but Mexicans fill theirs with combinations of pumpkin, chocolate, meat, pineapple, raisins, vegetables and green corn to name just a few of the possible ingredients. The Mississippi Delta tamale, on the other hand, is filled only with beef, chili and spices. 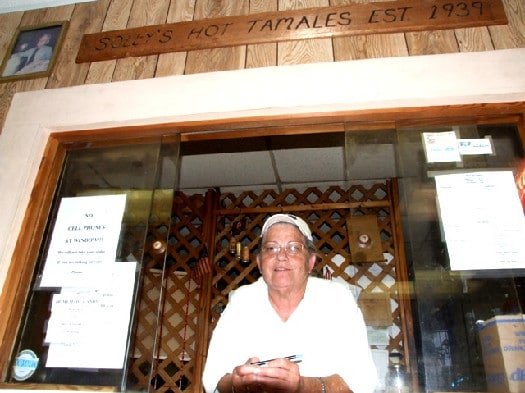 Presiding over an institution.

If I listen closely, I can make out the low hum of giant automated farm sprayers shooting water over the fields. Every now and then, an old moss-covered sharecropper home rots in the distance. Even less frequently, I see shacks that have been transformed into lodging for intrepid tourists.

The demise of the cotton crop led the occupants of these shacks—the African-Americans who created the blues and the Delta hot tamale—to move to large American cities such as Memphis, Chicago and New Orleans. Their remaining descendants are spread throughout the multitude of small river-hugging towns across the region.

I’m driving toward one of these small towns to speak with the self-proclaimed “King of the Hot Tamale,” Willie Harmon.

Part businessman, part raconteur, and part preacher, Harmon, 64, sits across from me in the shade of the tamale restaurant he is building in Hollandale, Miss. The tiny town teeters on the brink between civilization and reclamation by Mother Nature. Many of the buildings are boarded up and abandoned.

Locals drive by in cars and call out, “Hey, Hot Tamale Man!” and Harmon gives them a slow, regal nod. He leans forward and places his hands together. The knuckles on his right hand are still crooked from a brawl at a juke joint he owned before he became a hot tamale man.

“When I was a young man I met a traveling man,” he relates. “The traveling man told me that if a man could sell hot tamales in a place where there was no hot tamales, well then, that hot tamale man could make a lot of money. I couldn’t stop thinking about how hot tamales were my future.”

Harmon says he’s been selling hot tamales out of his car and from carts in these small towns for the past 35 years. He believes the hot tamale came to the Mississippi Delta from Mexican workers, but he doesn’t agree that the tamale is a purely Mexican dish.

“As far as I know from a Mexican up the street, Indians in Latin America made the first tamales and they were the ones who showed the Mexicans how,” he suggests. “Actually, the tamale is an Indian dish.”

Did Native Americans really make tamales? Did the recipe emerge independently of the Mexican version? I try to imagine Choctaw Indians showing Delta settlers how to make them.

“Could be, could be,” Harmon says with an uncertain shrug. Lawns and hedges are growing wild here, and sidewalks are broken. Gypsy moths have enveloped a large oak, making the tree appear as if it is covered in fog despite the bright sunshine.

I’m getting hungry again. I tell Harmon I am hunting for the history of the great hot tamale of the Mississippi Delta. He laughs and tells me his son Willie has a hot tamale stand, called “Hot Tamale Heaven,” just up the road in Greenville.

It sits amid a strip of fast food joints, between a Wendy’s and a root beer shop. I order half a dozen from Willie’s air-conditioned stand. Today, everything is locked up tight against 100-plus degree heat. No children are playing outside in the Delta summer sun.

Willie’s hot tamales are fat, and the meat is loaded with cumin and garlic. They’re delicious, but I’m on a mission. I set off for Nelson Street, in the old part of town.

The wide street once bustled with musicians, field hands, hustlers and juke joint owners. Now the juke joints are boarded up, metal bars cover broken windows, and shingles are falling from the sides of dilapidated buildings.

At the end of the street is a small white house; the sign says “Doe’s Eat Place.” There are Doe’s franchises throughout this part of the Deep South. But this one is the original, started as a juke joint by Dominick “Doe” Signa and his family.

Doe’s wife, Mamie, developed a still-secret hot tamale recipe, and by 1941, the couple ran a steak and tamales restaurant out of the back of the house. In those segregated times, the sit-down restaurant was only for white people. It became so profitable Doe and Mamie shut down the juke joint.

I walk into the front parlor and I see a large woman stirring a large pot on a large stove. She doesn’t want to interrupt her preparation for the evening meal by answering questions.

Cathy Wong, the manager, comes over instead and explains how her family, from Hong Kong, was friends with the Italian-American Signa family. I ask about this southern cultural mix in the south as she shows me around the living-room-like restaurant, where four women are rolling tamales by hand.

By hand, of course.

Wong, 55, explains that many immigrants—Lebanese, Italian, Chinese and Jewish—opened up shops in poor parts of Delta towns, and catered to working-class African-Americans. Since Italian and Spanish are similar languages, was it easier for Italians like the Signa family to learn the tamale recipe from Mexican workers?

Wong is unsure. “Perhaps,” she says. Her insight into hot tamale heritage is that they have “generally been a black food.” Noted Mississippi Delta Documentarian Amy Evans feels that the language connection is likely.

At Doe’s, the hot tamales have paper wrappers instead of the usual corn husks. The tamales appear rather slender and light, but they are laden with oil, and the seasonings are subtle.

They make a wonderful afternoon snack, and I’m overly fortified for my next stop, in tiny Rosedale, Miss. My stomach gurgles for the help of an antacid. The main street there is named Joe Pope Boulevard, in honor of the man who founded the “White Front Café.”

The town is tiny and pushed up against the Mississippi River levee. The trouble is, I can’t find the café. I see no gaudy signs or flashing lights. Finally, a local points me to a non-descript white house with the tiniest of signs over the door. By the time I walk in, even my sunglasses are dripping.

Inside, Barbara Pope, 64, is gathering a few dozen hot tamales for a customer. She is the sister of Joe Pope himself, and she says nothing when I introduce myself and explain my hot tamale mission. She goes back to serving the customer in front of me.

Another customer pipes up. “These here are the best hot tamales anywhere. Ms. Barbara don’t even send these tamales in the mail. You have to come here with your own pot to her shop.”

Ms. Barbara sits down and silently turns the pages of the Bible, writing down verses. I bite into one of her hot tamales and I am amazed by the mix of spices and meat, filling but not heavy.

I am finally out of questions. Ms. Barbara stands before my table. Sunlight shines in from the doorway across her face and she smiles. I know I have found what I am looking for, and it doesn’t come in the form of an answer. 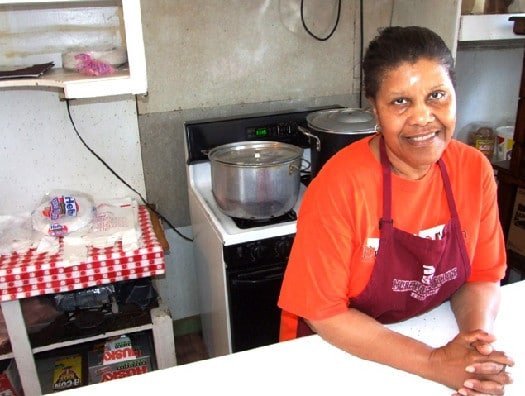 Barbara Pope in Rosedale, Mississippi, lets the hot tamales speak for themselves.