Little By Little, Turkey is Empire 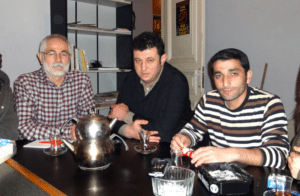 ISTANBUL, Turkey—I had asked my Turkish friend Ali what he thought of Arabs and the Arab world. Normally a peaceful man, Ali rolled his eyes and sneered, “That fucker Lawrence of Arabia played at being an Arab, meanwhile inciting the Arabs to stab us in the back.”

Turkey’s View Toward the Middle East during (and before) the Arab Uprisings… published on March 22, 2011 by New America Media.

That was on a summer night in 2002, as we sat alfresco at a meyhane bar, which plays Türkü, the folk music of Anatolia and central Asia. Our glasses were full of Raki, the popular anise aperitif, and we looked out at the Sea of Marmara, enjoying the southwest breeze.

“We Turks can never forget what the Arabs– our brothers in Islam–did to us,” Ali continued. “We can forgive them, maybe, but we can’t forget what they did.”

It is winter now and almost 10 years later. The government of the Islamist Justice and Development Party (JDP or AK Parti in Turkish) long ago closed the old meyhane bar by the sea and leased the land to a cemaat, a private Turkish religious network. There’s a “family friendly” non-alcoholic café in its place.

Ali sits in the café sipping tea, wishing we were drinking Raki again. It’s not just our drinks that have changed in a decade. The Turks’ “national perspective on Arabs and the Islamic world has totally changed” because of the JDP, Ali says.
On November 3, 2002, the right-leaning, neo-liberal and Islamist JDP, won an overwhelming electoral victory in national elections, and its leader Recep Tayyip Erdogan became Prime Minister. It boomed like thunder across the Turkish political, cultural and economic landscape. The Zeitgeist had changed. For the first time in the history of the Turkish Republic, an Islamist political party now dominated the legislative and executive branches of government.

Before 2002, small parties formed coalition governments. “The military was always behind each of these governments, somewhat controlling the course the country took,” explains “Mehmet”, an associate professor of Turkish studies, who refused to give his real name for fear of losing his job.

The power of the Turkish military in politics cannot be understated. The first president, Mustafa Kemal Ataturk, headed the Turkish military after World War I and assigned it to be the protectors of the secular “free” Turkish Republic. Accordingly the military has staged four coup d’états (1960, 1971, 1980, 1997) claiming the freely elected governments were becoming dangers to the “secular” state.

Consequently, “in an Islamic nation, be it Egypt or Libya or Turkey,the concept of secularism equals military repression and, ultimately, dictators who do not act in the people’s interest,” says Ali Mendillioglu, a union activist. “In the 20th and early 21st centuries Islam has always represented the repressed.”

The JDP’s national election victories since 2002—wherein it won 40 to 50% of the vote–have weakened the military. This was especially true after the 2007 Ergenekon scandal when high-ranking military leaders were arrested for plotting a coup against the Erdogan government.

“The reality is that people are no longer afraid of the military in Turkey,” explains Professor Hakan Yilmaz, Bosphorus University Political Science and International Relations. “Before we always knew some elements in the military where involved in ‘deep’ government activities—assassinations and the like–but no one could say anything. Now, special federal prosecutors are moving against military individuals who may have acted illegally by planning a coup d’état.”

The military brass and other secular “Kemalists,” or followers of Mustafa Kemal Ataturk, always encouraged Turks to look away from the Middle East and think of themselves as a European nation. But Europe hasn’t reciprocated.

“Many people feel that the European Union is playing tricks with Turkey by constantly giving us new conditions for joining,” says Mine Yalcin, a lawyer. “These same people ask why we are trying to join an organization and culture that does not want us and does not like us.”

With the pro-Europe military losing some of its clout, Prime Minister Erdogan has turned Turkey towards its traditional religious roots in the Middle East. Professor “Mehmet” says, “the JDP has had a profound effect on the Turkish people in every facet of life. Our Turkish people now look with much sympathy toward the Arab World and the Arabs’ struggles in Palestine, Egypt and beyond. Tayyip (Erdogan) tries to appear as the leader of the Islamic world.”

The flotilla that left from Turkey on May 31 last year, ostensibly to bring “relief aid” to the Gaza strip, was just one example of rising Turkish solidarity with Arabs in the Middle East. Turkey has a lot of what many in Egypt, Yemen, Libya and Tunisia desire–a freely elected Islamist-leaning government in a capitalistic parliamentary system.

Because of the JDP’s strength and Erdogan’s popularity, most Turks scoff at the notion that their nation will be rocked by protests similar to those in the Arab world. Professor Yilmaz feels that the sentiments that caused the current Arab uprisings are similar to those in Turkey 50 to 60 years ago, when many disparate groups began to unite to end one-party military rule.

“But Turkey is now far too complex a system to protest in this manner,” claims Yilmaz, “I mean, we have democracy. We can vote what we want to change. We have a free press.”

Turks are keenly watching the events in Egypt and Libya. There are many Turkish businesses and nationals living all over the Middle East. Up until the recent unrest in Libya more than 15,000 Turkish citizens were living and working there.

But Doruk Goksu, a lawyer, doesn’t believe Turks and Arabs will become closer because of the uprisings. “It is doubtful,” he says. “We don’t have enough technology for them to want to work with us and they don’t have anything but oil which is a dying resource. Our cultures are too different.”

Nevertheless, writer-activist Mehmet Gunes believes that many in the Arab world will try to emulate the government of Prime Minister Erdogan. Describing the JDP as the party of the new Turkish capitalist rich, Gunes states, “There will be a new connection of money and wealth in many governments across the Middle East with the military and the Islamists forming an alliance similar to what has happened in Turkey under the rule of the JDP.”

But Yilmaz argues that while Turkey is not exactly a part of the Middle East, Turkey will form closer relationships with Arab states. “Turkey is an empire,” Yilmaz explains, “But I don’t mean empire in the traditional sense of land acquisition.” He sees Turkey and the Middle East forming closer bonds based on cultural and historic affinities dating back to the Ottoman and Roman Empires. In doing so, Yilmaz says Turkey can open the Middle East to the “wider western world” by acting as a peacemaker and supporting development and democratization in the region.

Turkish worldview has changed a lot since Ali and I drank late into the night in 2002. Now as we sip our tea, Ali, a “Kemalist” supporter of the Turkish military, says he is thrilled by the uprisings in the Arab world. But he’s also worried about the effect Erdogan’s Islamic party has had on Turkish society. “Damlaya damlaya (little by little) the JDP ties the head-covering of our women, one centimeter by one centimeter every year. Until one day we will wake up and we realize that our secular free government is over,” he says sadly, shaking his head. “Will we be like Iran? Never. Will we be like the Arab world? Maybe. The point is Turkey from this point forward will always be more and more religious.”
The same might be true for the rest of the Arab world after the dust settles from the uprisings.