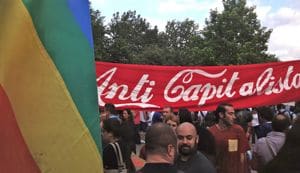 Read at www.istanbulvoices.org posted on June 6, 2013

Just last year the Turkish economy was booming. The wealthy were getting wealthy. The poor poorer. Nike told us to just do it and we just did it. Everyone seemed happy.

But now things have changed never to be the same again. Kurds are protesting arm in arm with pro-Kemal/Atatürk secularists who are marching with Communists. The Gay, Lesbian and Bisexual movements are shoulder to shoulder with people who repressed them in the past. Protestors have taken over the entire downtown of Istanbul. It’s amazing and unprecedented. Why did it all happen?

One factor is the growing tension over Syria. However, that is just the tip of the iceberg… What is more important to the creation of the Gezi Park Revolt is the Uludere Massacre by the Turkish government which left 34 Kurdish villagers dead in December of 2011. The Uludere Massacre was quickly covered up the Erdoğan government. Then last month’s Syrian attack against the municipality of Rayhanlı on the Syrian border was followed by state controlled blackout of the bombing in the Turkish media. This led to anger at Prime Minister Recep Tayyip Erdoğan’s two faced dealings with the public.

Also, many who are protesting decry the alliance between Erdoğan’s AK Parti and the Islamist Gülen Movement. The Gülen Movement is a group of Islamists organized around the teachings of Fethullah Gülen, an inspirational Turkish imam who is in self-imposed exile in the Catskills of Pennsylvania. The religious network of Sunni Muslims which support Gülen has become influential in Turkey’s judicial and police sectors, not to mention in the business, media and education fields of the country. Erdoğan and Gülen are thought by many protestors to be closely allied. The reality is much more complex with AK Parti and the Gülenists being involved in a complex dance. The two groups are only allied only when it is convenient for both sides. At any rate, Erdoğan is thought by many involved in the revolt to be pushing for a direct Islamist cultural and political take over of Turkey.

In the past few years Erdoğan has stepped up government control of formally independent media outlets. Arrests of academics, lawyers, and politicians has increased as police and national prosecutors flex new muscles. All of these complaints came to a head in the conflict over the last green space in downtown Istanbul, Gezi Park. The Erdoğan government planned to tear down the park and in its place build a shopping mall and a mosque. It was at this meeting point of state repression, media control, neo-liberal privatization and conservation that Turkey exploded.

Erdoğan responded to the protests and police clashes in his typical chauvinistic manner. He claimed that he could have one million of his own supporters in the park. But none of Erdoğan’s supporters came. The opposite happened. The revolt grew. Now the resistance against the Erdoğan government in Taksim Square’s Gezi Park is historic. We are living in a new Turkey. 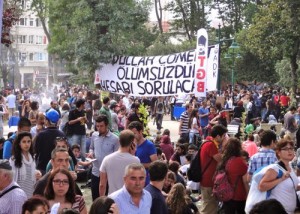 The engine that keeps Gezi Park in Taksim Square crowded is the remarkable coalition that’s formed among otherwise warring groups–the secularist Atatürkists, the Kurdish rights supporters and leftists. This is not a protest about economic problems or about political parties. It’s an ideological protest. All the political and economic stuff will be worked out after a new ideology is formed in Gezi Park.

Groups have come together because they don’t like the direction the country is going.  There’s a huge Ataturk pro-Kemalist group that’s secular and doesn’t approve of the Islamist tilt of the government. Some of these Atatürkists are supporters of the military and so tend to be oppressive and anti-democratic themselves. But other Atatürkists, while adoring Atatürk, are more democratically inclined.

Meanwhile, many Kurds in Gezi Park see Atatürk as a villain who directly destroyed their national goals of independence. Kurdish leaders who are connected with the Kurdish Peace and Democracy Party (BDP) have related to me that being Kurdish in Turkey is like being “Black or Latino in the US.” Many Kurds say they are between “two fascisms”; Ataturk’s Turkish nationalism and Erdoğan’s Islamic capitalism. So, progressive Kurds and other leftists are looking for a third way or “Third Wave” by using the unifying concept of minority rights. Then there are the communists, socialists, leftists, gays, lesbians, bisexuals and feminists. These groups have – in some way shape or form – become allied with the Kurdish rights party, the BDP. Perhaps it will be the BDP and the BDP’s charismatic Istanbul Representative Sırrı Süreyya Önder who will be able to organize a new “Third Wave” ideology in Turkey.

Presently the BDP Kurds and leftists and the nationalist secular Atatürkists have a working alliance. Neither side trusts the other but both sides are opposed to the ruling Islamist AK Parti of Prime Minister Erdoğan.

If there’s a split in this coalition — like if the Atatürkists attack the pro-independent Peace and Democratic Party of the Kurds — the coalition will come apart.

Presently few protestors are listening or reading to the state controlled mass media. Like in Egypt and Tunisia the digital media outlets of Facebook and Twitter have become the new recorders of society. All the older TV stations and newspapers are distrusted. If it were not for social media this present revolt would not have been possible. 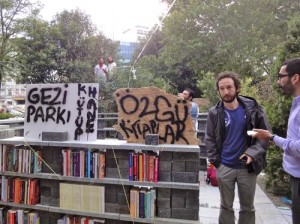 I think it is inevitable that the coalition of Atatürkists and Kurds and leftists will break down but before this happens I think we will have time for real social change to happen in Turkey. This is a time, a blessed chance for enlightenment. Gezi Park is a wonderful place to be right now! It makes me think of the Summer of Love in San Francisco in 1967 and Paris in 1968. All the grand sides of Anatolian culture are present; friendship and tolerance and gentleness abide in Gezi Park. The last time Turkey went through something like this was during the Constitutional Revolution in 1908-1909. Just as Ataturk’s social revolution resulted from the events in 1908-1909, so too will a new ideology be forged today which will effect Turkey and the world in the coming years.