WHERE ELSE CAN THEY SURVIVE? 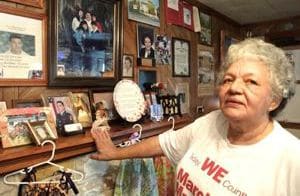 This feature article was published by New America Media in July 2010.
DULAC, LOUISIANA — Some days the only people she serves are wayward journalists and well meaning volunteers come down to south Louisiana after the nation’s worst oil spill. Some days not even the journalists or volunteers come. The locals have long since abandoned her restaurant. 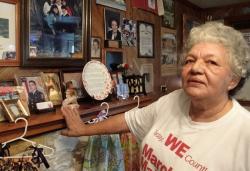 In the early afternoon Lois Salinas, 69, owner and sole worker at Annie’s Restaurant in Dulac, Louisiana sits alone on her back porch, which overlooks the swelling Grand Caillou Bayou (pronounced KAI-U). Ms. Salinas is a Houma Native American and her people have been fishing, working and living on Grand Caillou Bayou since before the Anglo or French speaking white man arrived. Now Salinas (or as she is known in her community, Ms. Lois) ponders the slow destruction of her culture.

“One thing that makes me sad is that my grandkids and great-grandkids won’t have a chance to see this culture… one day it’s all gonna be gone,” Ms. Lois laments, staring fatalistically at the full Grand Caillou Bayou.

The dual processes of salt water intrusion into south Louisiana’s coast line (happening ever since the Mississippi River was dammed in the early 1930s) and the BP oil spill in the Gulf of Mexico have destroyed or disabled much of the coastline and fishing lands of south Louisiana. Both of these developments have given many in south Louisiana a bleak outlook on the future.

Recently oil from BP’s Deepwater Horizon leek has been sighted as close as 30 miles from Dulac. Given this proximity much of the area fishing has been closed. The loss of fishing traffic up and down Grand Caillou Bayou has meant a sharp decline in business for Ms. Lois.

Normally at this time of year scores of boats would pass Ms. Lois’ restaurant on Grand Caillou Bayou going out into the wetlands and coast to fish and shrimp. Ms. Lois explains, “They used to stop and chat with me and order a hamburger or get a drink. Now, since the oil spill, there is very little boat traffic.”

While all races and peoples of Dulac are affected by the BP oil spill in the Gulf of Mexico, the Houma Native Americans have been hit especially hard. It has only been since 1967 that the Houma people have been able to attend and complete high school with area Whites and African Americans. Because of this historic lack of education, poverty is endemic throughout much the Houma community. “Most Houma found it easier to work on a boat or in the oil and natural gas industry than to own their own boats or move up the corporate ladder,” relates United Methodist Pastor Kirby Verret of Dulac, 63, a Houma Native American.

Up the road from Ms. Lois’ restaurant a Native American mass is held at Holy Family Catholic Church. The service is a communal prayer for the coast and the lands traditionally inhabited by the Houma. Near the alter a Houma drum circle beats a rhythm while at the pulpit a Houma woman says 10 Hail Marys, 10 Our Fathers and then entreats God to protect their homeland and homewaters. Holy herbs are burnt and presented to the congregation. Dancers in Houma clothes dance. Catholic priests sermonize in English and French. (French is the language the Houma first adopted as a trade language and then — over time — as a native language.)

Back at Annie’s Restaurant Ms. Lois says she and her family are lucky. She owns the restaurant which was handed down to her by her mother (her mother was named Annie, the namesake of Anne’s Restaurant). “My children have good jobs and they like to come out and visit me. They like that I run my own business,” Ms. Lois states, “but they don’t want to do this job.”

Representatives from the U.S. Small Business Administration have approached Ms. Lois and explained that she is eligible for a loan to help raise the height of her restaurant in order to protect it in case of floods, hurricanes and coastal erosion. Yet, Ms. Lois feels that without an heir to pass the restaurant on to, “…taking a 30 year (S.B.A.) loan makes no sense… I’m in good health as far as I know but who knows what the future holds?”

And who knows what the next hurricane might bring?

Millions of barrels of oil sit stagnant on the Gulf or have been pushed down to the seabed by dispersants. Were a storm or hurricane to come ashore anytime this summer low lying communities like Dulac will be at risk of oil contamination. Says Ms. Lois, “With a hurricane, you wash out, come back, rebuild… but with oil (contamination) it could take years to get it all cleaned up.”

Oil contamination coming with a hurricane is the sum of all fears for the people of this bayou land. Still with faith and resolve the Houma people stay here unshaken. They reason, without this place where else can their culture survive?