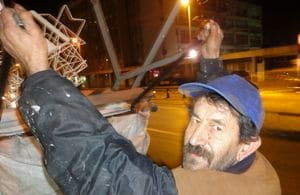 Years ago Ali had worked as a painter of skyscrapers in Ankara, Turkey. He liked the climb up the ladder, the walk on the narrow wooden board to his place on the side of a huge building. Ali would paint for hours, loving the sunlight and breeze and fresh air.

Then one spring day when the wind was soft in Ankara, Turkey and the sun beat down, Ali looked up and saw a helicopter coming out of the distance over the flat Anatolian plateau. He watched the helicopter change from a tiny dot in the sky to the nearing swopswopswop swing sound of the helicopter blades over the countryside, then over the city and coming closer, closer… Ali felt like he was meant to – at this moment – see this moving floating object coming toward him.

Finally it was right up close, flying around the skyscraper he was painting. The helicopter flew in a few circles around then stopped dead in the middle of the air, floating, like a shark watching him, staring at him. In that moment of the staring helicopter the ground of Ankara flew up, made Ali dizzy and he suddenly realized where he was, so high from the ground on a tiny twig of a wood board… Ali clung to the side of the building he was working on. He dropped his paint roller and it fell, fell, fell down and Ali thought he should call down to warn any passerbys below that the paint roller was coming their way but it was too late. His voice would never reach the people before his paint roller did.

The paint roller crashed below making a small explosive sound as it hit the ground and missed two workers. All Ali could do was move inch by inch along the narrow board, gripping the side of the building. Finally he was by the ladder. Very slowly Ali climbed down.

After that job Ali did other jobs and finally “fell into the trash.” For years he learned trash inside and out and then began to write his observations about his life in trash. Ali says that for him to wear plastic protective gloves when he sorts would be the same as seeing that helicopter again come out of the flat horizon. If Ali wore gloves when he sorted trash he would be forced to see how society judged him as a trash sorter. And he could never do his work again.