The police moved as an army against the crowd of protestors using batons and shields and tear gas and water cannons. For the police it was the march of the victorious. They shot tear gas directly into the crowd, washing over eyes and faces. When one cannot breath and cannot see (stumbling and falling) one only wants to live. Some in the crowd collapsed from the tear gas canisters hitting them in their heads and all of the crowd ran, the fear lit in minds like a flame… “We want to live, we want to live, we want to live”… The protestors of Gezi Park crowded into the back streets of the city, falling over each other. 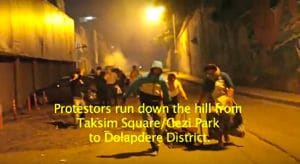 Many who had run hid in cafes, apartment flats and restaurants. The people of downtown Istanbul stayed in their hiding places under table tops, lights turned off, curtains pulled as the police marched by outside. The people gasped for breath in the chemicalized haze of super-powerful tear gas engineered in far away lands. Faces and eyes were doused with lemons and anti-tear gas liquid. Breathing came hard. Special chemicals in the water from the police tank cannons burned the skin for hours. From the first whiff the tear gas almost knocked one unconscious.

As the night went on people checked facebook and twitter, the only dependable sources of information in this Revolt of Turkey. They learned that Divan Hotel, which was the makeshift hospital for the Gezi Park Resistance, had been totally gassed. Volunteer doctors who were caring for the gravely injured were arrested. Supporters of the Gezi Park movement shared pictures of protestors shot with buckshot and of skin burns from the police water cannons.

And yet other news arose. New groups of citizens were on the streets from Gazi Mahallesi, Kadıköy, Eyüp, Beşiktaş, Sarıyer.. huge numbers of new protestors made their way to downtown Istanbul and there in the late morning hours fought with the national Police and the Gendarme (military police) in Nişantaşı and Osmanbey neighborhoods. Settle in world, this Revolt and Resistance of Turkey is not going anywhere.

Ed. Note: Tens of thousands gathered in Instanbul Sunday in a show of support for Turkish Prime Minister Recep Tayyip Erdogan, who on Saturday appeared to run out of patience with ongoing protests. Saturday’s pro-government rally followed a night of violent clashes with protestors in and around Gezi Park, the site of the near three-week long protests that have since spread nationwide. Police used tear gas to drive protestors from the area surrounding the park. Reports put the number of injured at 150, six of them seriously. Five casualties have so far been reported since the unrest began 18 days ago, with thousands injured. Reporter Sean David Hobbs is a long-time resident of Istanbul who has been following the protests since they first began. He says that while police managed to clear Gezi, thousands of protestors reconvened in downtown Istanbul, where they quickly clashed again with police. He adds the “resistance isn’t going anywhere soon.” Hobbs and Turkish photojournalist Sinan Targay captured the following images during Sunday’s unrest.

Pictures and Video by Sinan Targay and Sean David Hobbs